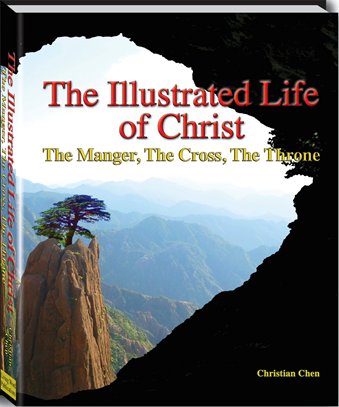 The Illustrated Life of Christ

Soft Cover: 530 pages in color with pictures, maps, and illustrations

Add to Cart
Excerpts from the Preface
Since the discovery of the Dead Sea Scrolls in 1947, many fruitful archaeological findings in the land of Israel have aided us to gain a deeper understanding of the historical context surrounding the life of Christ. If the historical background of Jesus’ time could be made more accessible, supplemented by illustrations, and further corroborated by recent archaeological advances, readers may better understand and absorb this rich spiritual inheritance — thus the intent and ultimate purpose of writing this book.

To present the background of Jesus’ life on earth in a more simple and visual way, there are a large number of annotated pictures and archaeological artifacts used to explain the history and geography of Israel. These are called out in insets with graphical illustrations corresponding to the descriptions in the main text. The main text is expositional, focusing on the multiple facets of the life of Christ, while the insets are informational, providing support to the main text. The author trusts that the readers will discern between the primary message versus the supplementary information and not switch the importance of the two.

The author now entrusts this book as five loaves and two fish into the nail-pierced hands of the Lord. May He break the bread and bless. May all who finish reading this book be like Peter and say to the Lord: “Lord, to whom shall we go? You have words of eternal life. We have believed and have come to know that You are the Holy One of God”; “You are the Christ, the Son of the living God”; and “Lord, You know all things; You know that I love You.”

Excerpts from the Book
“The birth of the Lord was most extraordinary and different from those of other great men. He was born on earth, but He also descended from heaven. He was the Word that became flesh, as introduced in John 1:1: ‘In the beginning was the Word, and the Word was with God, and the Word was God.’ The Word became flesh and was born in a manger over 2,000 years ago. This was the beginning of the earthly life of the Lord Jesus.

…in Bethany, there was the offering of Mary, the service of Martha, and the testimony of Lazarus, which is a miniaturized model of the Church. The Lord had many fond memories of this little village where He especially enjoyed rest and spent His last week on earth there. He would always return to Bethany in the evenings during that week. Jerusalem symbolizes the glory of Israel, yet it was mere appearance with no substance, like the fruitless fig tree that could not satisfy. However, Bethany, ‘the house of figs,’ could satisfy the heart of the Lord Jesus.

When the Lord was being taken up in a cloud, ‘And while they looked steadfastly toward heaven as He went up, behold, two men stood by them in white apparel, who also said, “Men of Galilee, why do you stand gazing up into heaven? This same Jesus, who was taken up from you into heaven, will so come in like manner as you saw Him go into heaven”’ (Acts 1:10-11). If the Lord Jesus was facing Bethany at His ascension, then on His return, He will still be facing His own!
‘Come, Lord Jesus!’ (Revelation 22:20).”